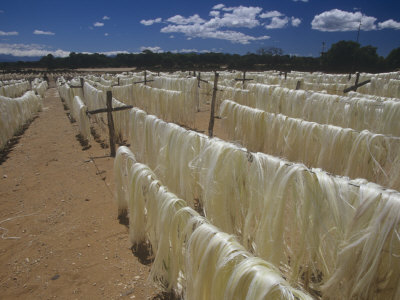 Fibre is extracted by a process known as decortication, where leaves are crushed and beaten by a rotating wheel set with blunt knives, so that only fibres remain. In East Africa, where production is typically on large estates, the leaves are transported to a central decortication plant, where water is used to wash away the waste parts of the leaf. The fibre is then dried, brushed and baled for export. Superior quality sisal is found in East Africa, once washed and decorticated. Proper drying is important as fibre quality depends largely on moisture content. Artificial drying has been found to result in generally better grades of fibre than sun drying, but is not feasible in the developing countries where sisal is produced. In the drier climate of north-east Brazil, sisal is mainly grown by smallholders and the fibre is extracted by teams using portable raspadors which do not use water. Fibre is subsequently cleaned by brushing. Dry fibres are machine combed and sorted into various grades, largely on the basis of the previous in-field separation of leaves into size groups.

Traditionally, sisal has been the leading material for agricultural twine (binder twine and baler twine) because of its strength, durability, ability to stretch, affinity for certain dyestuffs, and resistance to deterioration in saltwater. But the importance of this traditional use is diminishing with competition from polypropylene and the development of other haymaking techniques, while new higher-valued sisal products have been developed. Apart from ropes, twines, and general cordage, sisal is used in low-cost and specialty paper, dartboards, buffing cloth, filters, geotextiles, mattresses, carpets, handicrafts, wire rope cores, and Macramé. In recent years sisal has been utilized as an environmentally friendly strengthening agent to replace asbestos and fibreglass in composite materials in various uses including the automobile industry.. The lower-grade fibre is processed by the paper industry because of its high content of cellulose and hemicelluloses. The medium-grade fibre is used in the cordage industry for making ropes, baler and binder twine. Ropes and twines are widely employed for marine, agricultural, and general industrial use. The higher-grade fibre after treatment is converted into yarns and used by the carpet industry.

Despite the yarn durability sisal is known for, slight matting of sisal carpeting may occur in high-traffic areas. Sisal carpet does not build up static nor does it trap dust, so vacuuming is the only maintenance required. Depending on climatic conditions, sisal will absorb air humidity or release it, causing expansion or contraction. Sisal is not recommended for areas that receive wet spills or rain or snow. Sisal is used by itself in carpets or in blends with wool and acrylic for a softer hand.

As extraction of fibre uses only a small percentage of the plant, some attempts to improve economic viability have focused on utilising the waste material for production of biogas, for stockfeed, or the extraction of pharmaceutical materials.

Sisal (Agave sisalana) is an agave that yields a stiff fibre traditionally used in making twine, rope and also dartboards. The term may refer either to the plant or the fibre, depending on context.

(Species Agave sisalana), plant of the agave family (Agavaceae) is the most important of the leaf fibre group. The plant has a stalk on which the leaves are inserted. Its dimensions are about 1.2 m in height, with a diameter of approximately 20 cm. The lance-shaped leaves, growing out from the stalk in a dense rosette, are fleshy and rigid, with grey to dark green colour. Each is 0.8 to 1.5 m long, 7.6 cm wide at the base, and 10 to 16 cm across at the widest portion, terminating in a sharp spine. Propagation of sisal is generally by using bulbils produced from buds in the flower stalk or by suckers growing around the base of the plant, which are grown in nursery fields until large enough to be transplanted to their final position. These methods offer no potential for genetic improvement. Invitro multiplication of selected genetic material using meristematic tissue culture (MST) offers considerable potential for the development of improved genetic material. The sisal plant has a 7-10 year life-span and typically produces 200-250 commercially usable leaves. Each leaf contains an average of around 1000 fibres. The fibres account for only about 4% of the plant by weight. Sisal is considered a plant of the tropics and subtropics, since production benefits from temperatures above 25 degrees Celsius and sunshine. 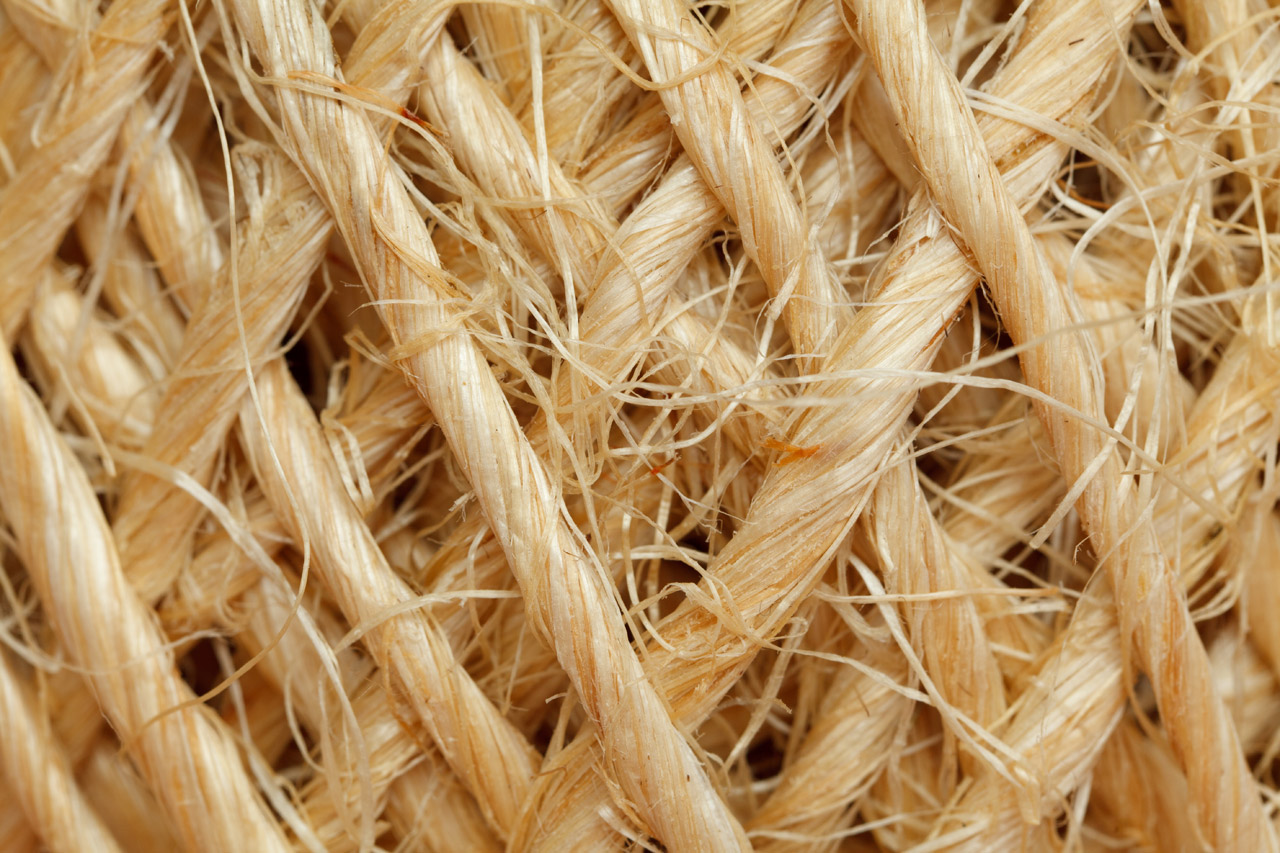 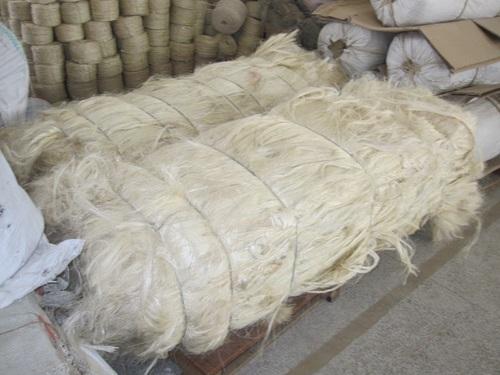 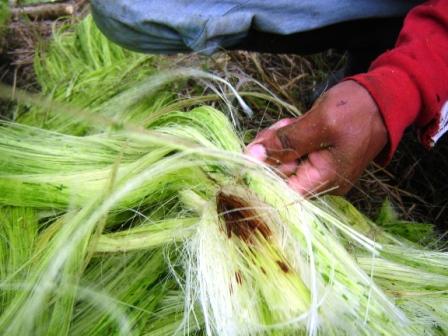