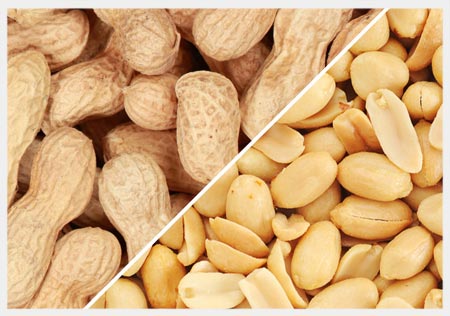 Peanut oil, also called by the name of arachis oil, is an edible vegetable oil extracted from peanuts. A widely used cooking oil in South Asian and Southeast countries, it is also popular in the western world. This all-purpose oil is known for its distinctive aroma, mild flavour and taste of its parent legume. Its high heat tolerance and high smoke point 450 degrees F (232.22 C), make it suitable for deep-frying and sauteing. Peanut oil is also a healthy oil for everyday use because it is high in monounsaturated and polyunsaturated fat.

Peanut oil is about 50 percent monounsaturated and 30 percent polyunsaturated. Its major constituents are:

Peanut oil is one of the widely used vegetable oils of the world. A pretty common cooking oil in Asian countries, this oil is also used in western countries. It also has numerous applications in Asian cooking. In west, it is widely used for frying foods, particularly french fries, turkey and chicken. This edible oil is often used in salad dressings, marinades, and baked goods.

It is the most widely used cooking oil in the South Indian state of Andhra Pradesh. It is one of the healthiest cooking oils for day to day needs and a tablespoon (approximately 15 grams) of peanut oil has just under 120 calories. In China, the peanut oil used is less refined, retaining a little bit more of the protein of the peanut and producing a stronger peanut flavor.

Other Specifications of Peanut Oil

Peanut organic oil is of great use for medicinal purposes. When used as carrier oil in combination with fresh lime juice, it works wonders in protecting the skin from ugly acne marks and black heads. The presence of monounsaturated fatty acids is beneficial in lowering down the cholesterol level. Peanut oil massage is extremely beneficial for people suffering from Arthritis.

Besides being widely used as an edible oil and it is also used in varied industrial applications. It is used as:

Caution: The use of this oil is not recommended for those people who are allergic to peanuts