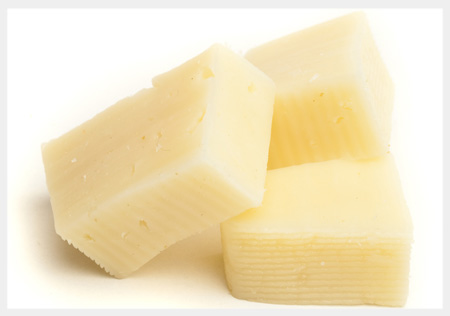 Edam cheese is an aged, semi-firm cheese with a yellow color and slightly tangy and salty flavor. The cheese is often dipped in wax as a preservative. Rich in both proteins and fats, edam cheese is also high in calories.

Edam (Dutch Edammer) is a Dutch cheese traditionally sold in spheres with a pale yellow interior and a coat of red paraffin wax. It is named after the town of Edam in the province of North Holland, where the cheese is coated for export sale and for the tourist high season. Edam which has aged for at least 17 weeks is coated with black wax, rather than the usual red or yellow. Edam ages and travels well, and does not spoil easily; these qualities (among others) made it the world’s most popular cheese between the 14th and 18th centuries, both at sea and in remote colonies. It is popular in North America, the Nordic countries, and many other countries around the world.