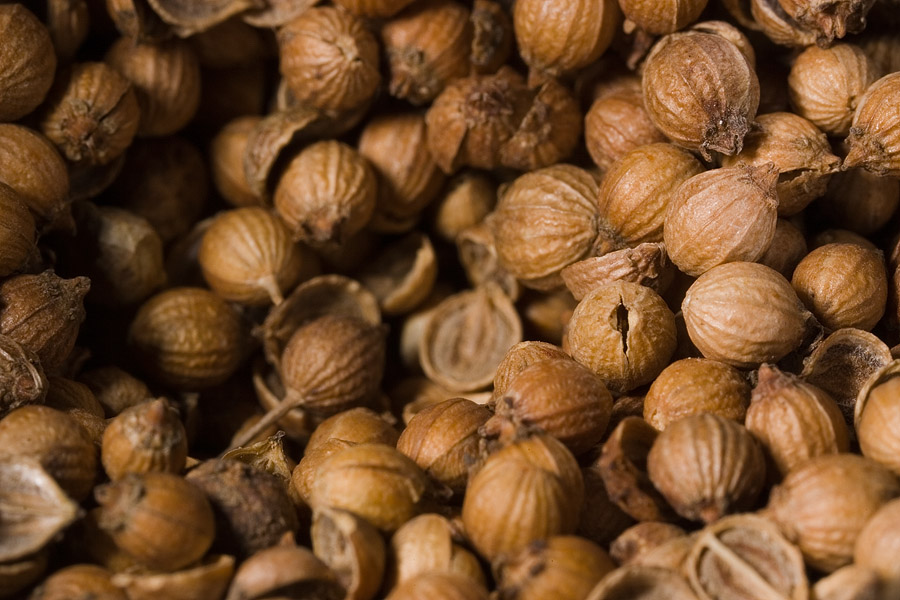 Coriander is the seed of a small plant. The seeds are almost spherical, one end being slightly pointed, the other slightly flattened. There are many longitudinal ridges. The length of the seed is 3 – 5 mm (1/8” – 3/16”) and the color, when dried, is usually brown, but may be green or off white. The seed is generally sold dried and in this state is apt to split into halves to reveal two partially hollow hemispheres and occasionally some internal powdery matter. Coriander is available both whole and ground. The fresh leaves of the plant are called cilantro and are used as an herb.

Bouquet: Seeds are sweet and aromatic when ripe. Unripe seeds are said to have an offensive smell. The leaves have a distinctive fragrance. Flavors: The seeds are warm, mild and sweetish. There is a citrus undertone similar to orange peel. The leaves combine well with many pungent dishes from India, Mexico and the Middle East. The leaves are always used fresh. They feature in Spanish, Middle Eastern, Indian, Oriental and South American cookery. They are sprinkled like parsley on cooked dishes, minced or puréed in sauces, soups and curries, especially bhuna. Both seeds and leaves can be used in salads. In Thailand the root of the coriander plant is used to flavors meats and curries.