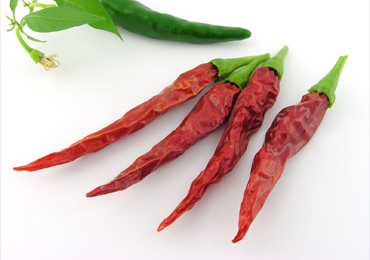 Chilli is the dried ripe fruit of the genus Capsicum. Capsicum annuum is an annual sub –shrub, the flowers of which are borne singly and fruits usually pendent, which provide red peppers, cayenne, paprika and chillies and sweet pepper (bell pepper) a mild form with large inflated fruits.

Capsicum frutescence is a perennial chilly with small sized pods which are highly pungent. It is commonly known as ‘bird chilly’ and ‘Tabasco’.

Chilly is reported to be a native of South America and is widely distributed in all tropical and sub tropical countries.

Chillies are the hot fruits of a range of capsicum species that originally came from the warm northern regions of South America. In the past 500 years they have been traded across the warm areas of the globe, and today chillies are an integral ingredient in many different cuisines around the world.

There are only four species of capsicum from which all of the modern chilli cultivars have been developed. The deciding factor when choosing a cultivar to grow is the intensity of heat that is produced when they are used in cooking, and it is for this reason that a heat scale from 1 to 10 has been developed to illustrate this to consumers. At the low end of the scale Capsicum annum ‘Anaheim’ or ‘New Mexico’ has a rating of 1 and at the hot end of the scale with a rating of 10 from Cuba is Capsicum chinense ‘Habanero’ also known as Scotch Bonnet or Bahama Mama. Besides the hotness, chillies also impart a unique flavour to food.

Chillies thrive in alkaline soils, with the exception of Capsicum chinense ‘Rocotillo’, which has a rating of 8 and likes acidic soil, but chillies are generally very adaptable to a variety of soil types. They are also ideal for growing in containers.

Garam Masala which literally means hot (Garam) spice (Masala) is not an spice in itself. It is a spice blend used throughout India and the rest of the Indian Subcontinent.

This special blend of spice is used in a small quantity at the end of cooking or fried in the beginning of cooking to add a subtle flavor to the cooked dish. Please note, garam masala must be added in small quantities, or else it will overpower the dish.

Many different kind of Garam Masala is found depending on the region and the personal taste. Garam Masala can be found easily in international section of any big groceries store in west or in any Indian or South Asian shops. The most common way of making Garam Masala is given below.